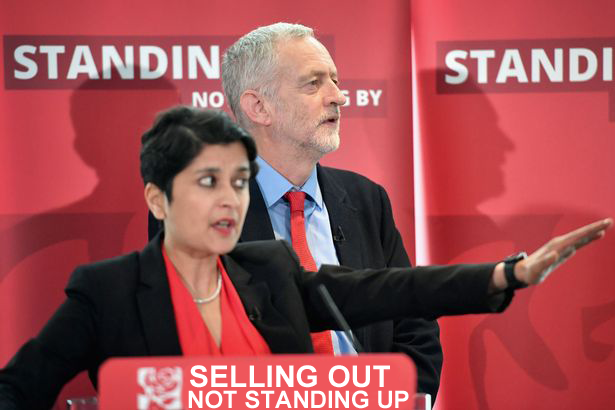 A well-deserved place in the Hall of Shame for Shami Chakrabarti. Years of reputation-building thrown away for a peerage.  Was it really worth it, Shami? Presiding over the most cack-handedly naked sham review of anti-semitism and then taking her pieces of silver whilst maintaining the pretence of competence in the face of all evidence to the contrary. This is the kind of farcical yet sinister behaviour you expect from tinpot dictatorships and – the kind of regime that Shami as Director of Liberty made a living out of opposing.

Shameless has now exposed herself as a classic sanctimonious, careerist, hypocritical, champagne-lefty happy to tell others what they should do and to impose that on them whilst doing the opposite herself. See if you can watch this video without feeling distinctly queasy – I certainly can’t. Given that Sham Shami has had plenty of time to prepare and is an experienced speaker and presenter on the World stage, the car-crash incoherence and lack of reason in her utterly unconvincing arguments defies comprehension.  She apparently believes that everybody else’s kids should go to the local comprehensive school. But for some impenetrable reason it is apparently OK for her to send her child to a private school instead – apparently because she’s wealthy?

View all posts by Kevin Holdridge →

© 2014 Kevin Holdridge. Wibblings on life, business, the Web, and football